Jordan is Middle East country, though it's surrounding countries are Syria, Iraq, Izrael, Palestine, Saudi Arabia, it is relatively safe country. People in Jordan are really nice and friendly, especially when you go to out of the city.

Amman is the capital city of Jordan, We lived in hotel Al-Fanar Palace Hotel close to the University of Jordan. The city is very big with 4 million inhabitants, public transport is provided by buses, but there is no schedule for them and it is little bit challenging to figure out what bus to take. The other option is taxi or Uber, but it is little bit expensive if you are alone. The city isn't very friendly for pedestrians, everybody is driving a car.

Jordan is mostly desert, even through there is a lot off trees, but no grass. IAESTE Jordan organized trips for us to Baptism Site, Dead Sea, Petra, Wadi Rum, Read Sea, Aqaba, Jerash ... They paid for everything except entrance fees. Than we rented car and visited Wadi Mujib, Madaba, As Salt, Mount Nebo ... There is many places to visit, but you have to pay entrance for everything (Arabs pay no entrance fees or significantly less price than foreigners)

I worked with one trainee from Brazil in company Bab-El Amood Civil Engineering and Contracting Company. It is medium-size company with approximately 50 employees, most of them are in site and there is maybe 8 people in the office. They were nice to us and always helped us when we had any questions, but they had only one project going on and there was not many things to do.

In first 2 weeks they gave us contracts and drawings for different projects to study. Than we visited construction site few times and made reports about what we have seen. During next weeks it was basically the same, they just finished major project before we came and there was just one small project going on while we were there.

We received 65 JD per week. It is enough if you cook and share taxi to work or take buses.

They required 'good' english, most of the Jordanians does not speak english or speak very badly.

Accommodation was provided by IAESTE Jordan. We paid 20 JD per week, rest of it was paid by IAESTE Jordan. We stayed in hotel in rooms for 2 people, in some of the rooms wifi didn't work, there was no place where to cook and hotel laundry was insanely expensive. But there was swimming pool full of children, gym, sauna and breakfast for 7 JD.

They provided pickup for us from the airport for 20 JD. All of us stayed in the same hotel so we were meeting each other every day. IAESTE volunteers often picked us up at the hotel and took us to downtown or other places.

Every day at the hotel.

There is gym and pool at the hotel, running outside is little bit dangerous because of the traffic.

We tried many local specialties as Mansef, Knufeh, Shawarma, Falafel, but mostly we ate shawarma at restaurant near hotel.

I bought local sim card for 17 JD. For calls to Czech Republic I used Facebook with wifi from hotel.

I met many interesting people from around the world and tried how it is to live abroad for a while. I would definitely recommend this experience even though I didn't learn many technical thing related to my specialisation.

They helped us with everything that we needed as extending visas, transport from the airport. Many times they gave us free ride from hotel to restaurant or shisha place (about 30 km out of Amman). They also organized trips for us and we had to pay only for entrance to monuments. It was very pleasant experience with IAESTE Jordan.

IAESTE provided with all necessary information before departure and there were no problems during our stay in Jordan. 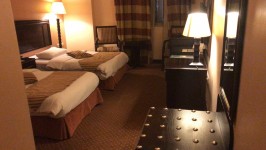 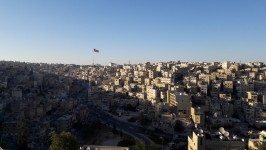 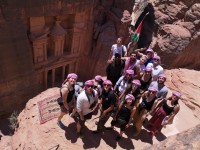 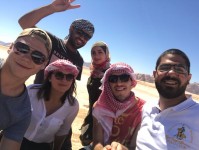 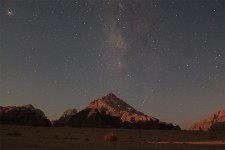