Russia is one of the biggest countries in the world partly in Europe and partly in Asia, but most of the population lives in the European part.
If you are coming in autumn, be prepared for a slightly colder weather than in Central Europe.

Moscow is the capital of Russia and has over 13 million citizens but much more also lives in the surrounding area. Even though it's the capital, it's hard to find people who can speak English (or basically any other language apart from Russian). Due to the size of Moscow, don't be surprised if you have to travel within the city for more than an hour.
There are many things you can visit within Moscow itself - Kremlin and the Red Square, galleries (Pushkin, Tretyakov, New Tretyakov), parks (Gorky park, Vorobyovy gory, Kolomenskoye, Tsaritsyno) or just take a tour of the metro (you can actually pick up an audio guide at the help desk of some of the metro stations). You definitely won't get bored in this city.

Institute of Biochemical Physics, Russian Academy of Sciences.
I was working in a department focused on food chemistry and biotechnology.
My supervisors were very nice to me and spoke good English.

During my internship, the research dealt with the physico-chemical properties of the nanoparticles of whey protein isolate (WPI) considered as delivery nanovehicles for polyunsaturated lipids.
I got the chance to try the following methods:
- preparation of pure and loaded PC liposomes
- protein solution preparation
- partial unfolding of whey proteins by heating
- mechanical and ultrasonic homogenization
- formation of the complex between WPI and phosphatidylcholine liposomes
- refractometry

The salary is very low (2000 rubles, accommodation was already paid for) and you will probably spend much more in the first days when you come on public transport tickets, sim card and other things. But fortunately Russia is quite a cheap country, so it's not so difficult to afford the necessities. I would say the investment is worth it.
The salary is usually given at the end of the internship.

There are not many people in Russia who can speak very good English (or English at all) so as long as you can communicate on a basic level at the laboratory, you'll be fine.
But I would recommend learning some basics of Russian language (at least to read the cyrillic letters), it will come in handy. For Slavic nationalities, it's quite easy to understand and communicate the basics but for the rest it can be struggle.

The accommodation was provided and paid by the D. Mendeleev University of Chemical Technology of Russia (RXTY) as the inviting institution. If you work at this university or at the Russian Academy of Sciences, you will most probably stay here.
The dormitories are located on the edge of the city as the metro station Planernaya, so it took about an hour to go to work or to the city centre. If you will work at the university itself, it's much closer.
In the dormitories, you will probably share a room with one or two people. Two rooms always have a common bathroom and toilet. There is a kitchen available at one of the floors at the dormitory but it's basically only a stove. No fridge is available but they said that next year they are planning to buy one for the trainees. Also there is no washing machine available. (The Russian students buy these equipment on their own and they just have a room where they can put it at the dormitories.)
The dormitories are not very clean and it can happen that there will be some bugs around. Also the windows are not always very well isolated so it can be a bit cold.

I had to get from the airport to the dormitories on my own and there I met one of the helpers who gave me the keys from my room and showed me where it is, but unfortunately she couldn't speak much English. The next day we met another helper who could speak German and could explain to us the basics and helped us with the registration.
There was a WhatsApp group for all the trainees so we could meet up (as we were staying at two different dormitories) and also some Russian members were in this group. They helped us when we had any questions and organised few meetings.

During autumn, there were quite a lot of other students. At my dormitory, there were about 15 students and at the other one around 5. Most of these students were Germans, so knowledge of German came in handy as well :D

In autumn the weather is not very good for any outdoor activities, but if it's nice weather you can rent a bicycle to go around the city.
For culture, you can go to the theatre (for example Swan lake) or you can check which festivals are happening (in September, there is a light festival).

Borsch, vareniki, bliny and much more...
But be careful with the food as you can easily get a food poisoning.

I put credit on my Skype account and used it to call home. There is wifi everywhere (even in the metro) so it's easy to use to call home, also the mobile tariffs have big data packages, so there was no problem.

Learn some Russian or install a really good translator on your phone :D
And be open to the differences and to the different standards, it can be quite overwhelming at the beginning but it's an interesting experience.

- bring your ISIC card (otherwise you cannot get a student discount at the museums)
- bring an umbrella and rainboots (when there is a heavy rain, the water stays on the street so without rainboots it's almost impossible to cross a street sometimes)
- bring active carbon (it's very likely you will have some digestion problems so be prepared rather than try to discuss with the pharmacist using a google translator)
- if you will stay at the same dorms, bring a boiling kettle so you at least have some warm tea when it's cold ;)
- bring some washing detergents to do your laundry by hand

I earned an insight into the research done at my department, I learned a bit of Russian and I got to know the Russian culture.

Everything was arranged in time and there was always someone we could contact in case of any problems.

It's an unforgettable experience! It's a challenge worth taking :)

For more photos, you can see my instagram: https://www.instagram.com/simkovakris/ 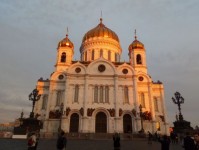 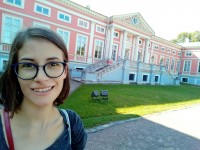 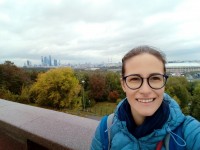 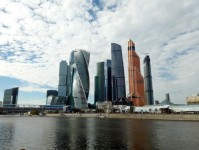 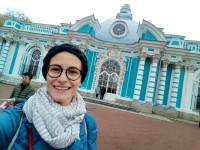 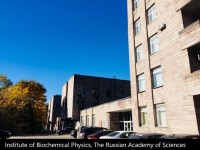