Macedonia is a country in the Balkan peninsula in Southeast Europe. My internship was in the capital city - Skopje. Bus from Nis is about 4,5 hours. 7 hours to Thessaloniki.

Skopje is the capital city of the Republic of Macedonia. Skopje is located in the north Macedonia, in the centre of the Balkan peninsula. It has about half a million inhabitants. There are way too many statues, especially in the city centre. There are many different parts, one of the unique was Old Bazaar.

Just above Skopje there is Vodno with the Millenium cross. Apart from that there are many possibilities such as Kosovo (Pristina, Prizren), Albania (Tirana, Durres) - done during the weekend, trips to Greece (Leptokarya - really nice or Chalkidiki), Istanbul (12hrs by bus), Ohrid - the most picturesque city in Macedonia)

My employer was HASELT. It has about 40 employees. Working hours were from 9 to 17. There wasn't any dress code but you were supposed to wear long trousers. Together we were 6 interns, 4 Software developers and 2 designers.

I was part of software developers group. We were supposed to do something like HR management system. It was an internal project. We were doing it from scratch with help of the mentor. Our mentor was CTO in the company. Also, other employees were open to help whenever we needed. People in the company are great, most of the time they respected there was some foreigner and they didn't have any problems to speak whole discussions in English. They were very open and did their best to make us feel comfortable.

22000MKD. I was really lucky because most of the salaries range from 13000 to 17000 MKD. It was sufficient but since I travelled a lot also to other countries it wasn't enough.

IAESTE provided us accommodation in dorms - Dom za slepy - cost about 9000 for 2 months. (150MKD for a night). It was ok but we didn't have a fridge for about 3 weeks since I came (We brought it finally from IAESTE office). The fridge was pretty small, obviously, there was not enough space for 20 people. It has no kitchen as well. In the end, we had to move out, apparently because Macedonian students were coming and IAESTE members were not really prepared for this and interns who ended their internships few days after moving out had nowhere to stay. In the end, it was sorted out though.

They picked me up at the bus station and went with me to work on the first day. I think they did it for almost every intern. Overall they did many evening events like going to pubs or the club. They also organised several trips which were also quite good though we are probably used to better organisation anyway. But on the other side, in the end, they also organised sport or some other game events.

The main meeting point was the dorm and every other activity.

Hiking to Vodno, swimming in a swimming pool, volleyball and many others. You just have to interest.

Since there was no kitchen, we ate almost always outside. Bakeries are really from (Silbo is the most popular one), but you can get a lunch for 90 MKD up. In an average good restaurant food costs about 180 - 250 MKD. In fancier ones, it usually goes above 250 MKD. Overall pretty cheap.

Internet in the dorm was kind of problematic, many times it just didn't work but we got 8GB of mobile data so there was no problem at all.

Well, they told us there will be a lot of hiking and to take our sleeping bag with us. I think I was the only one who brought these things (hiking shoes + sleeping bag). Sleeping bags were provided when we went to Galichnik wedding and I didn't use hiking shoes at all. So don't bring it, you will save a lot of space in your luggage. Taxi drivers tend to scam people (just for others 150MKD from bus station to Dom za slepy).
Knowledge of Cyrillic is an advantage.
Public transportation: You will need a card which you will beep every time you enter the bus. One ride costs 35 MKD, monthly ticket 1400 MKD. Card itself (at least for the monthly ticket) costs 200 MKD.

Euros. You will have hard times to change CZK in Macedonia.

It helped a lot to fully discover Balkan. People outside of Skopje hardly speak English but sometimes they surprise.

They did really good. Many events organized.

Great, it unites people :) Each person was different from another part of the world. 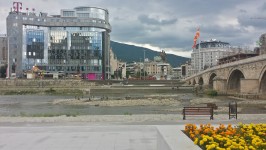 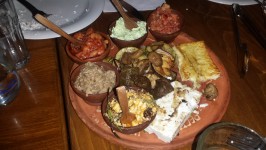 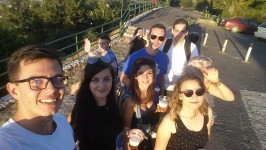 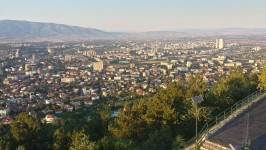 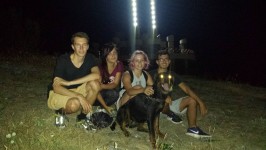 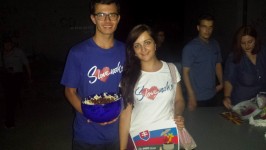 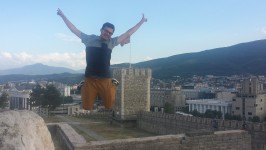 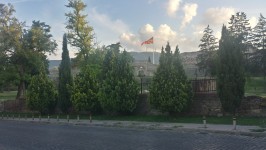 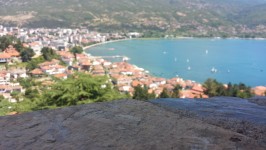 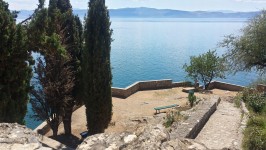 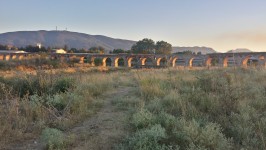