Jordan is Middle East country surrounded by Syria, Iraq, Izrael, Palestine, Saudi Arabia. Even though the whole region struggle under several conflicts, Jordan has remained its peace and stability.
Amman is the capital and the biggest city in Jordan.

Amman could be described as an open minded city, quite westernized. It's growing up rapidly during these days, there are old parts and completely new districts.
There are some sights and features to admire, but I like the most the overall atmosphere of the city itself. It differs from what we know from Europe: poshy buildings just next to the typical marketplaces with yelling vendors, heavy and crazy traffic and absolutely stunning views (especially during the night)!

Jordan is mostly desert, in the summer there's no rain for about four months - nevertheless, there are many interesting places to visit.
We have been in Jerash, Madaba, Karak, Aljoun forest, Wadi Mujib, Dead Sea, Red Sea, Aqaba, Wadi Rum,... It's also possible to visit Izrael but I haven't tried it (and later regret it so you should do it :D ).
IAESTE JO organize some trips or we took a bus or travel with collegues from our work, travelling with locals is highly recommended (but not really necessary) to avoid being cheated everywhere and for smoother communication.

Al-Nabil Food Industries - one of the biggest food producers in Middle East, manufacture a wide range of frozen and chilled products. That includes beef, chicken, lamb, turkey, fish, pastries, desserts and ready meals. Nabil produces for several chains (McDonalds, Subway, Papa Jones etc.) and it has its private brand, exporting the good mostly around the region, some for USA and Australia.

My first task was to improve documentation used for final product specification - I've updated original sheets in order to meet European standards.
My second task was to improve documentation for sensory evaluation for ; there costumer's product, to be more efficient and convenient for users.
It was combination of lab work (sensory lab) and office work, I had to communicate with management as well as with people from production, made some basic research about the documentation etc. - overall was pretty educative for me, I've learnt A LOT while solving the issues, had a little meetings to show my work.
It was an opportunity I'm really grateful for.

All trainees were receiving 50 JD per week - it's sufficient for an accommodation and basic food but absolutely insufficient for anything else. Jordan is really expensive - going out there was always kind a price, trips were expensive, entrances for non-Arabic people as well so you must have some savings definitely. But is worth it!

English around B2-C1 is fine, some of my fellows were great speakers some of them were not able to say a word. And they'll always appreciate you to learn some Arabic :-)

Was arranged by IAESTE Jordan - we will in a 3 stars hotel in west Amman, breakfast included. Hotel was really nice and tidy, stuff friendly. In one suite there were 2 persons, there is one bedroom, and one small living room with a basic kitchen, a bathroom. There is a wifi connection (quite weak), gym (well.....gym....some iron and a cheap treadmill but better than nothing xD ), iron,..
It costs 20 JD per week.

IAESTE members organize some trips, they gave us tips where to go out, where to eat, they went out with us several times - all of them were super friendly, kind and always ready to help us!
Airport: they can order you a taxi driver who will pick you up and get you to the hotel, very pleasant especially if you arrive during the night. It costs around 20 JD.
One story: My original traineeship was about to take place somewhere completely else than Nabil, but it had been canceled one day before my arrival to Jordan. Local IAESTE arranged new internship quickly (I waited 1 week), paid my accommodation as a refund for inconveniences and -on the top of that- they paid me even the salary because there was no time to arrange these financial issues with Nabil... It's just an example how immensely helpful and self-giving they are. Thank you IAESTE JO for everything

We lived together in the same hotel (like 20 of us in total), we meet each other on the daily basis. Many events/parties/dinners/hangouts done, new friendships set up :-)
There were people from around the world and all of them were so nice!

Sport: we walked a lot, also joined "Fast walking clubs" - yep, people meet to walk fast, don't be surprised :D. Guys were playing football, there are some gyms as well but expensive, we took some free dance classes.
Culture: Personally I've missed a culture life and events so heavily that it was for sure my biggest culture shock. I got used to living and energetic Prague with hundreds events happening daily! Than my Danish colleague showed me the medicine: it's an app called "Around town"

Middle Eastern cuisine was one of the reasons I took an internship in Jordan - hummus, hummus, hummus and hummus and falafel and all of these fresh herbs, vegetable and fruit... Just amazing! I'm vegetarian so I didn't try many of the traditional specialities, but the one I ate were delicious. And it's actually cheaper to eat something out (falafel sandwich is for 0,5 JD = 15 CZK) than to cook.
There are many nice places where to eat, I would definitely reccomend you to visit Sufra, Hashem for local food. Jordanians don't like to eat foreign food - there're not so many restaurants offering pizza or sushi or whatever, so you will try to eat as locals for sure.
Close to the hotel there are some groceries, bigger Caffefour is like 15 minutes walking.

Bring more modest clothes - afterall it's islamic country, it's not polite to wear shorts, or show your shoulders. It's the mark for girls especially: people will hoot on you, maybe yell on you but nobody will harm you. Just don't do anything you wouldn't been doing back home, like walking alone during a night etc. Wear long trousers, skirts, long sleeves, no need to cover your hair if you're not Muslim. There are some pubs and bars where nobody cares what are you wearing, but it's difficult and tricky to judge it.
You can buy everything there, but remember that it's pricy so bring as many things you're gonna need with you.

Go there, it's amazing experience! Dont expect Europe, it is not. But it doesn't mean that is jungle neither! Jordanians are really kind, always smiling despite their hard lifes. After 6 weeks, Jordan is really under my skine, wishing to come back one time :-)

Hope I will go with IAESTE one more time :-)

Dont hesitate to contact me!!! I'm gonna tell you as much infomation as I can to help you :-) go for it!
Guide: Lonely Planet - Jordan (english version, 2015)
contact: [email protected] FB: Veronika Palowski 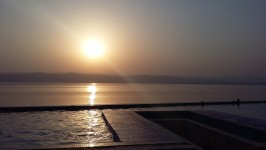 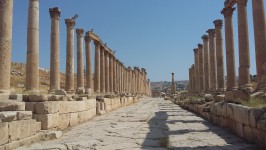 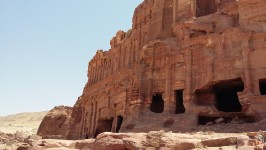 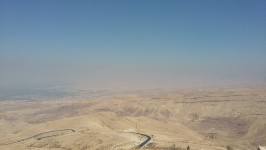 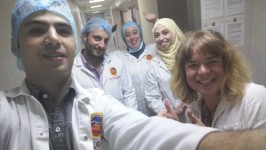 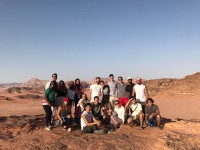 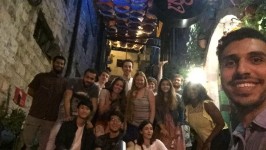