Colombia is located in South America but in the northern hemisphere. It lies very close to the equator. There is a lot of mountains, so the weather and the temperature are very dependent on the location of each city. The state has borders with Venezuela, Panama, Brazil, Ecuador.

Cali is located in the valley of the river Cauca. There are three mountain ranges of Andes in Colombia. East, central and west. Cali is in the valley between the west and central. It lies only 1 000 m above sea level so the weather is very hot. During day the temperature rises to around 35°C and during night drops to 25°C. In some months it rains a lot and in others not at all.
In the city there are all kinds of neighborhoods, there are modern commercial centers that look the same as european ones and there are also very dangerous and ruined neighborhoods that are best to avoid. There is a lot of green in the city but the pollution of the rivers is in a catastrophic state. Around 3 millions of people live there. The public transportation is insufficient for this amount of people so the buses are always overfull and the traffic is terrible.

Very close to Cali there are national parks with volcanos, the area where the coffee is produced, the thermals or the villages where the indigenous people live. Besides that you can go to the sea. The Pacific is very close (3 hours by bus to Buenaventura). The city is very ugly and dangerous, but you can cross it quickly and continue by boat to the beaches nearby. Or you can go to Caribe beaches to the north by plane (2 hours) or bus (around 24 hours). Also you can go to San Andres which is an island in Caribe near Nicaragua but belonging to Colombia.
If you go somewhere by bus it usually takes a lot of time because you have to cross the mountains, the traffic is terrible and the roads could in a be better state. The quality of the buses depends on the companies. But the standards of most of the companies are the air conditioner, electricity for charging phones and wifi. The travel by bus is safe. Only sometimes there can be problems with the protests of the indigenous people who block the roads occasionally. The planes are expensive so you have to book your flight in advance.

I was employed at Univalle (Universidad del Valle). It is a public university and is one of the biggest in Colombia. In the laboratory the equipment was more or less the same as I have in Prague. The atmosphere at the university was very good and warm. At the university there is also a department of international relations and they helped us with everything (like visas or renting houses).

I was working with power electronics, induction motor, control system and computer with Matlab. My project was about strategies to control induction motors. It consisted of theoretical and practical part. I designed a control strategy and then tested it on the motor. I was also allowed to attend classes with subjects that I chose (but it was not mandatory). I was going to the university almost every day. Not all days, when sometimes I needed to extend the weekend it was possible. And not for all day, when I needed to leave early or arrive later it was also possible.

Required language was english perfect or spanish good. I did not speak spanish at all, so the beginning was hard but later I have learnt it. Although there were some foreign students from IAESTE who did not learn anything from the language during the whole internship. So I recommend to learn something before you go. My professor at the university spoke fluent english. At the university there were a few people who spoke english. But outside of the university no one speaks english. Nor at the borders at the airport nor at the immigration office.

I had to find it and I had to pay for it. There are a lot of opportunities in Cali. At the university there are advertisements from people who are looking for roommates. First, I was living in a big house in a nice (a little bit tourist) area of the city. There was another 10 people in the house, mostly foreign students as well. Everyone had his room, there were 2 kitchens, a lot of common space and 4 bathrooms, which even had hot water, which is very rare in Cali. I paid 450 000 pesos (3 300 Kč) per month. Then I moved to a smaller house to one Colombian student. She was living in a popular neighbourhood (popular means a poorer area where normal Colombians live). She was living in one room and had two rooms left that she rented to other students. The house was modern inside but I lost some things like hot water, table or chair. I paid 250 000 pesos (1 800 Kč) per month. Sometimes in some parts of Cali there are problems with electricity and water supply but it usually does not take long (usually less than 2 hours, but sometimes for 2 days).

The IAESTE in Colombia is only in the city of Ibagué. It takes 6 hours to drive there by bus. Every year there is one meeting. It was not mandatory to go there but it is recommended. We met in Ibagué and then went to the coffee zone. Around 40 students came there. The meeting was very good, I recommend you to attend it. We had some competitions and visited interesting places in Colombia. Then we agreed to organise a second meeting and about 20 students attended. It was great as well and we went to the desert.

There was around 30 international students at the university. Most of them from Germany (maybe eight) followed by Mexico (around six). With some of the students I was living in a house, we travelled through Colombia, spent time together and helped each other with everythnig in the city. But there were only four of us from IAESTE.

You can learn how to dance Salsa, there is a lot of clubs where they dance only salsa. You can pay for some dance lessons or you can take free lessons at some places. At some streets you can also see traditional performances. Prepare to hear reggaeton all the time. And if you don't hear it it is because you hear salsa.
They love football. When there is some play with the national team, they watch it online at the university. You can go to gym, pool or play almost anything for free at the university.

Bandeja is an usual and cheap lunch. It costs around 5500 pesos (40 kč) and contains rice, beans or lentils, mature platano, and fried meat. You can buy it in small street restaurants. Then there are bigger restaurants that look more european with variety of foods but the prize is higher. Besides, there are Mc Donald's, KFC, Burger King and others with the prices the same as in Czech Republic. Then there is a lot of street fast foods on little carriages where you buy grilled meat, sausages and other snacks.
They have a lot of food specialties in Colombia. Platano is something like a banana but not a banana. They treat it like vegetables and cook it. It can be prepared either in a sweet or salty way. Chontaduro is a fruit almost without taste, its consistency reminds me of a cooked potato. They eat it with salt and honey. The foreigners usually don't like it but you should try it. Aguardiente is an alcoholic drink and has 30 % of alcohol. It is something like ouzo but tastes ok. Mango biche is a mango which is not mature but is green. They eat it with salt and lemon. Sancocho is a soup with a lot of things in it. The speciality is a sancocho with a chicken claw. They don't have bread but they have some other pastry called pandebono. This one was very tasty. Lulo is a fruit that is more acid than lemon. The juice from lulo tastes delicious.

Safety is not the best in Cali. My friends were robbed a few times, sometimes with guns. So the important is not to have a lot of money with you, not to wear expensive clothes and not to show your cell phone in the streets. The Colombians say: Don't give papaya. Because the papaya given is papaya taken. But don't be afraid, most us were not robbed and most of the locals as well. People in Cali are very good people and are warm and friendly.
Learn spanish at least a little bit before you go there, because almost nobody speaks english.
You need to register your sim card and your phone within first three weeks. Otherwise they will stop working in Colombia (even your cellphone will not work with different sim cards).

Umbrella, because sometimes it rains.
Sweater, because in buses there are strong air conditioners.
Becherovka, as a gift to many persons.

I carried out the project with electric motors and have learnt new things.
I was cooperating with a professor who is a true capacity in his area.
I met a lot of new friends.
I have learnt spanish.
I visited places to which not many people will ever go.

During the internship we were in contact only in order to organise the meetings. Regarding other things (like scholarship) I was dealing with the university and they were communicating with IAESTE. 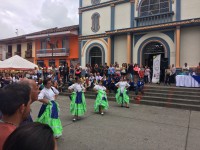 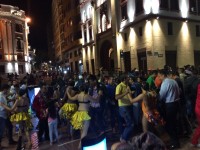 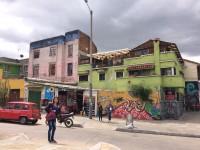 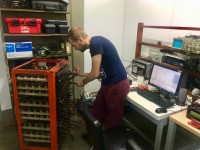 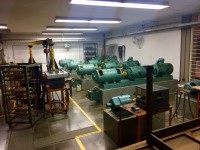 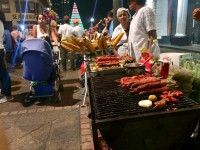 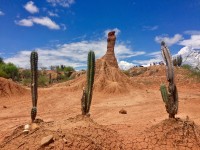 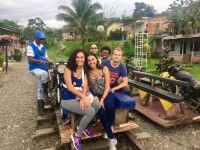 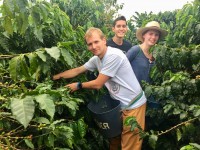