I was working in a Kyushu University in the main campus - Ito Campus. Ito Campus is located in a beautiful peninsula about 50 minutes from city centre of Fukuoka. Since the city was a bit far, therefore it was not possible to spend all the free time there. I really recommend to buy/rent a bicycle. City is much approachable afterwards and it is easier to move around Campus as well.

Fukuoka is nice coastal city. It is the biggest city on Kyushu Island and therefore there are a lot of ways how to spend your time. Close to the centre is a beach, there is famous street food stalls, lot of shrines, countless karaoke bars. One of the most famous Ramens (typical food) is coming from Fukuoka - Ichiran. In a city are a lot of parks, ruins of a castle and Japanese garden as well. If you are fond of shopping, just go ahead, there are numbers of shopping centres.

Since Fukuoka is the biggest city at Kyushu it is not hard to travel all around Island. Nagasaki is 2 hours far by train. For a weekend hiking trip I recommend really nice volcanic Mountains - Kuju and Aso. One hour far by bus is famous castle Kumamoto. However, it was badly damaged by earthquake in 2016 and till 2018 is under reconstruction.

In smaller distance is one of the most Japanese shrines - Dazaifu. Kyushu is one of the most active volcanic islands, so there are a lot of hot springs (traditional Onsens) all around Kyushu and some beautiful natural ones are one hour far from city. Many others even closer.

Even though Ito Campus is a bit aside from the city, it is one of the recommended places to visit when you are in Fukuoka. Don't hesitate to go for BBQ or for a bike trip around the peninsula. There are a lot of really nice hidden natural treasures like waterfalls, cliffs, beaches and also shrines in a forest.

I was working at Kyushu University in a department of Material Science in the research group of prof. Yamazaki. The University is modern and one of best in Japan. It is really international and you can meet employers and students from all around the world.

I was mainly in contact with foreign department and my research group. I can't say a bad word. Everybody was really helpful and made my stay as good as possible.

In my work, I did an inorganic synthesis of acceptor doped Barium Zirconate - BZS60 (BaZr0,4Sc0,603). Afterwards, I made an XRD analysis to find out exact crystal structure. Subsequently, I determined proton conductivity using TGA analysis. My experiment is part of more complex study of local structure of Scandium-doped BaZrO3 with different amounts of Scandium. The ceramic can be used as electrolyte in fuel cells.

During all my work a have as many consultations as I wanted, and there was no problem in work planning.

I was given 65 000 yen per moths excluded dormitory which was already paid by foreign department. Salary was also enough for some smaller trips around the city. I had two weeks of travelling after internship, so I am not sure what exactly was my living cost. However, salary was sufficient.

Required English level was excellent. Honestly, I had much better English than needed for work. Japanese people don't have the best English so you don't need much.There were guys from Malaysia, and one girl from China in my group and they have a similar level as I had. However, if you have good communication skills and you can read English scientific papers your English is good enough. Need to say, that there are a lot of English speaking people you can talk to in the campus.

The accommodation was provided by university and was already paid from my salary. I am not sure how much it was. I had to pay internet (1800 yen/ 2 months), electricity (about 4000 yen/month) and water (about 2000 yen /2 months).

I had single room with AC, small kitchen, bathroom with toilet. I was clean and well equipped. There was remote-controlled light as well.

There is no IAESTE in Fukuoka, so all service was provided by the foreign department of the University. Even though I cared about well. Withdraw is that you have to fit into business hous when you need something. For example my flight arrival was in late night, so I had to go to Uni by myself. However, that wasn´t problem, the airport is basically in the city at subway line and they sent me really good description via mail.

There were non events, but as I already said, big international group at the Uni and city provided a lot of people to hang out but you have to look for them. Nobody is going to care about your free time.

There were 4 of interns of IAESTE and we met some foreign students at dorms. Thanks to them we met another international people from Fukuoka, some of them not connected to Uni. So it was quite nice to spend time with people who love to meet another internationals and are not students. We went for fireworks, BBQ, karaoke and some other trips.

In Campus was gym and also athletic field. My research and I, we were playing volleyball and I went for a run to a seacost few times. I went also by bicycle around the beautiful peninsula few times.

Japanese culture is not really used to make close friends. Even though they are really nice and friendly, get closer to them is hard. However, being a tourist here is amazing. Everybody wants to help, people are smiling and gladly answer any question. Japan have many nice natural wonders and hundreds of shrines everywhere. Just explore.

Not surprisingly, food is based on rice. Rice bowl with some sauce and meat is the basic meal. Then you can have many awesome Ramens (typical soup-like meal) and Udons (udon = thick noodles, mostly in soup). In japan you can also find typical Japanese Curry which is much smoother, not spicy and sweeter than the Indian one. And no, they are not eating sushi all the time. However, when they do, it´s great! When it comes to food, I really liked it.

On the other hand, its hard to eat in European style. Fruits and bread is really expensive. And you have to be bit flexible to what you want to eat.

Skype. The Internet is really good there. I had prepaid card in my phone and was in contact with all the world all the time.

Firstly, if you want to travel, find out some information about RAIL PASS. It is a card that allow you to use all JR trains (national company), which is everywhere. You can buy it for 1, 2 or 3 weeks (2 weeks = 370€) and it is real with it! BUT...you can buy it just outside of Japan, not when you are already there. Thanks to that I was travelling for two weeks (Tokio, Kyoto, Osaka, Himeji, Hiroshima, Nagasaki).

Secondly, meet internationals. That is where your summer begins.

This internship was beneficial from both sides, work experience and cultural. My work was interesting and I had opportunity to work with new analysis techniques. On the other side I had enough time to move around Japan, meet locals as internationals from all over the world. 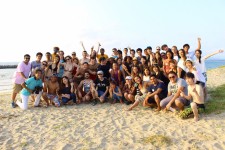 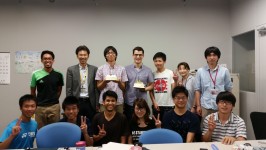 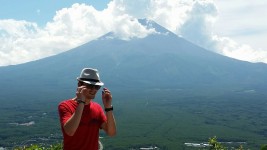 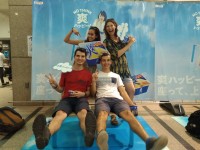 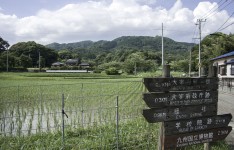 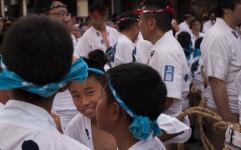 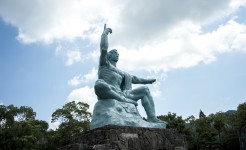 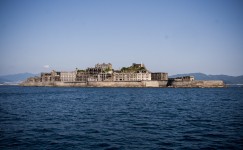 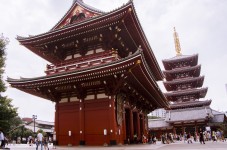 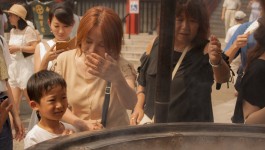 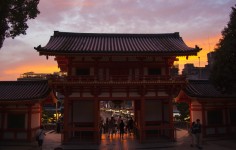