Germany is located in the central european continent is the fifth largest country in Europe, covering an area of 357,022 square kilometres; only the Ukraine, France, Spain and Sweden are bigger. Since reunification, there have been 16 länder or federal states. There are three city states – Berlin, Hamburg and Bremen – and 13 regions: Baden-Württemberg, Bavaria, Brandenburg, Hesse, Mecklenburg-Western Pomerania, Lower Saxony, North Rhine-Westphalia, Rhineland-Palatinate, Saarland, Saxony, Saxony-Anhalt, Schleswig-Holstein and Thuringia. Germany shares borders with nine other countries: Denmark, Poland, the Czech Republic, Austria, Switzerland, France, Belgium, Luxembourg and the Netherlands. About two-thirds of the population are Christian, split evenly between Protestant and Catholic, but you'll find more Protestants in the north and more Catholics in the south. There are around 4 million Muslims and 100,000 Jews..And it is sometimes known as ‘the land of poets and thinkers.Germany has the largest population in the EU but it's in decline,and the people speaks German which remains the language with the most native speakers in Europe,Germany boasts some of world's most famous inventions such as light bulb,automated calculator and the automobile.Germany's education system produces top performers and it's small and medium-sized enterprises (SMEs) account for around 52 percent of Germany's entire economic output and boast as the EU's largest economy with the highest employment rate.In terms of culture, Germany has more cultural activities and places than any other country.It is one of the largest book nation, a leader in climate and energy policies and also the highest producer of beer in Europe.

Jena is located in Eastern Germany and lies in the thuringen region with a population of about 120,000 people. The city is highly recognised as one the world best destination for optics and photonics. Famously home to such companies as Schott Glas and Zeiss, Jena offers a remarkable combination of industrial and intellectual heritage, research, innovation and academia. This is as evident in the city's institutions and universities as it is in the bars of the wonderful old quarter, which as cosy as they are traditional.

Light, glass and optics: thanks to the 'big three' – Carl Zeiss, Ernst Abbe and Otto Schott – Jena became one of Germany's leading industrial cities during the second half of the 19th century. Their collaboration produced the Zeiss factory and Schott Glas, both famous around the world. Research and enterprise cemented Jena's status as a centre of science and learning – a status that brings with it some exceptional museums. Chief among these are, of course, the Schott Glass Museum and the Optical Museum, dedicated to the life and legacy of Carl Zeiss and Ernst Abbe. But there are fascinating museums of literature and art history as well, including the City Museum at Alte Göhre or the Kunsthof Jena gallery. Jena is also dotted with architectural monuments, many of them associated with famous names. For example, there's the Zeiss planetarium that first opened in 1926, or the telescope-shaped JenTower, the tallest building in the city and the second tallest in eastern Germany.

Three other high-rise buildings are of particular interest too, each one helpfully named after the year of its completion: Bau 15 (Germany's first ever high-rise), Bau 36 and Bau 59 are prominent features of the city centre. Jena's idyllic setting in the Saale valley, ringed by steep limestone cliffs, makes it a very special destination. This was not lost on Goethe, who enjoyed regular trips to Jena, spending a total of five years in the city. Fellow writer Friedrich Schiller lived in Jena for twice that time. His summer house on Schillergässchen is a magnet for literature buffs – the oval stone table where he often sat with Goethe remains in the garden to this day. Then as now, the well-kept streets of the old quarter were the centre of social, student and literary life. Today, of course, there are also trendy cafés, excellent restaurants and delightful shops. You can even still see some of the 'seven wonders' of Jena here, such as the ornamental astronomical clock on the town hall and the Draco from around 1600, a terrifying dragon with seven heads thought to represent a board of examiners at the university.

Jena is surounded by other attractive cities within the free state of Thuringen.Surounding cities include, Efurt,which is the capital of Thuringen, saalfeild, Apolda, Weimer, Gera, weida, sommerda, Nuamburg,Zeits, Querfurt, Anrstdt, Zeulenroda. However, I am proud to say that part of my wonderful experience with IAESTE was a Tour with other IAESTE members from various countries to seven different cities of the free state of Thuringen such as Saalfeild where we visited the Miners cave and studed the formation of Calcium sulphate(CaS04), I also visited Efurt the region captal and the host of other attractive cities,including Berlin the German capital, Muninch, Leipzig etc.

Research and development with a deep study and insight in material science and Chemistry. Majorly, I was specialized in the research and development of Glass-ceramics such as silicate glasses and of course bio-glass ceramicss. My work was mainly to investigate a particular kind of glass ceramics which could crystalize a given sample of glass sample.This involve several laboratory processes to determine its, transition temperature, crystalization temperature, dilatometory softening point, density, coefficient of thermal expansion of the glass ceramics, and also nucleation.

650euro was my salary for each month throughout the three months I interned in Otto-Schott Institute for Material research, University of Jena, Germany. 650 euro was enough for me and sufficient for living expenses. The money took care of my accommodation which was 240 euro per month, feeding and travel expenses to some of the IAESTE organised programs in other cities within Germany, including my expenses for visiting my sending country(Czech Republic) during my internship period.

240 euro. Paid from the 650euro salary allocated for the internship program.

IAESTE members are amazing and incredible, everything that has to be done before my arrival was already in place and I was warmly received by IAESTE cordinators in Jena. Apart from that, a lot of events were organised in weekly basis and it was lively so to say, including traditional cooking on monday evening, dancing, movie, city view and walk and a lot of others..

IAESTE for me, was a point of interaction with many other international students from different cultural background and it was a perfect platform to cross-pollinate idea with other good minds and academically oriented interns as well as professionals in differents field of work.

Jena itself is a city of culture and sports, combined with the amazing sports and cultural activities of IAESTE, it then became a perfect match that every student dream of. I had a wonderful time with IAESTE sport and culture. I am highly proud to have identified with IAESTE, because I made new friends whom I actually perceived as real familly members through their mutual interations with me.

I enjoyed many and different kinds of foods which are common to the European delicacies and to crown it up, we had cooking evening on mondays of every week where different continental dishes were prepared by the IAESTE interns and of course members of IAESTE, so that was also an amazing experience for me.

I was able to visit the Czech Republic in three ocassions during my three months internship period and I was also writing to my Czech cordinator in email and facebook. That is Ms Kristyna Simkova.

Jena is a wonderful cities every student dreams of coming to participate their academic duties and from my own evaluation, I highly recommend Jena as one of the best internship destination because the free state of thuringen is highly oriented in research, technology and others.

The training experience I had in Jena through IAESTE traineeship which gave me the ability to expand my academic horizon as well as an opportunity to cross pollinate ideas with experts and professional is a take home achievement worthy to recond and unforgetable in the future. Highly appreciated also, is the cultural exchange experiences, I had the opportunity to learn basic German and other languages from other exchange students from different countries. IAESTE was also a perfect experience that familiarise me deeply into gaining strog insight in many aspect of my career and interning in the International Glass Institute, Otto-Schott, University of Jena made me consider myself lucky and among the sound minds. Seeing myself as a small fish in a big pond in the first month of training was also an amazing motivation that spore me into pewrforming excellently well and I have thank my supervisor for such an opened mindedness for teaching, training and instructions. Big thanks also to the host of IAESTE Chapter of the Czech Republic because they are the biggest role player to the dreams come true.

AS I earlier mentioned. I am excited that I was able to identify with IAESTE because it has helped me strengthen my academic and gain experience towards my P.hD program. I learnt a lot of thing in my field of study and it is worth a lot, preparing me for advance careers.

As IAESTE all over the world is a similar exchange traineeship, I wish to be part of IAESTE chapter of the Czech Republic and also have a good relationship with IAESTE Jena where I had my internship.

IAESTE is an amazing experience and I am excited to have participated. The training experience I had in Jena through IAESTE traineeship, gave me the ability to expand my academic horizon as well as an opportunity to cross pollinate ideas with experts and professional is a take home achievement worthy to recond and unforgetable in the future. Highly appreciated also, is the cultural exchange experiences, I had the opportunity to learn basic German and other languages from other exchange students from different countries. IAESTE was also a perfect experience that familiarise me deeply into gaining strog insight in many aspect of my career and interning in the International Glass Institute, Otto-Schott, University of Jena made me consider myself lucky and among the sound minds. Seeing myself as a small fish in a big pond in the first month of training was also an amazing motivation that spore me into pewrforming excellently well and I have thank my supervisor for such an opened mindedness for teaching, training and instructions. Big thanks also to the host of IAESTE Chapter of the Czech Republic because they are the biggest role player to the dreams come true.

IAESTE is the best training experience I have had during the cause of my academic program and big thanks to IAESTE worldwide for the great training exchange. 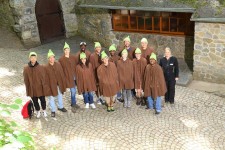 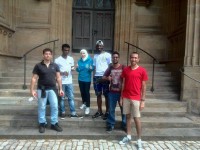 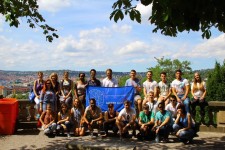 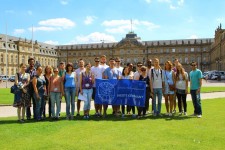 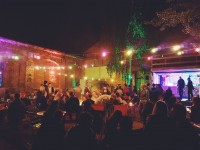 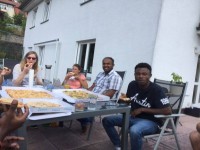