Officially,Hong Kong is "Special Administrative Region" of the PRC which means that it's an autonomous territory with it's own both economic system and government, though accounted by the Chinese government. It's located on the south-east of China mainland neighboring the province of Guangdong.
The Hong Kong territory consists of the HK island, the Kowloon Peninsula and the New Territories.

Hong Kong is on of the most populous cities in the world with about 7.5 million inhabitants. As it is an international financial and business hub it's impressively cosmopolitan.
The currency used is the Hong Kong dollar. The income inequality is very high and unfortunately, it is easy to notice when you visit different areas and go around the city at different times of the day. But still, the criminality itself is pretty low and I would definitely say, that it is one of the safest 'world'cities.

In the city-center, there is the renowned 'Victoria harbor' where a huge amount of cargo ships anchors. From each of the sides of the shore, you'll be impressed by the skyline which is just magical, especially at the sunrise.
The skyline has a negative side too; the whole city is just packed with thousands of skyscrapers which means that whenever you try to look up to the sky, you will only see an infinite amounts of windows and grey walls going up, but no blue.

Even though the public transportation service is quite rich, as there are countless of buses and very cheap taxies, the MTR (the rapid train) is the only efficient one during rush hours. It's because the traffic is extremely tied up on the roads.

The density, the high number of vehicles and all the nearby industrial areas of Mainland China have led to a very high level of pollution.

Hong Kong is not only a busy city but it also comprises of many islands, natural parks and reserves.
Personally, every weekend I'd go for a trip to get a bit of fresh air. There are many beautiful hiking trails around. Bear in mind though, that even if most of the peaks don't reach the Alpine ones, the weather conditions and temperature significantly add up. It is stunning to explore the nature around, but some of the tracks can be very demanding. The most spectacular hikes: Sharp peak, Dragon's back, Sai kung reserve... so I would definitely recommend to take your running/trekking shoes with you.

When it comes to islands, there are smaller and bigger ones, with nicer or worse beaches. Do not expect the sea to be sky-clear, there are still many millions people living in Hong Kong, so it comes to an effect.
The cleanest beach nearby the city is probably the one on Lantao island. There is also a Big Budhha - so worth a visit.

Other than that, there are 2 amusement parks; Ocean park(with a small zoo and roller-coasters) and a Disneyland.
Until mid-July, there is Horse-racing season and it's fairly exciting to watch&bet, so you should not miss that!

In my case, the employer was the Polytechnic university of Hong Kong - shortly PolyU.
It provided the accommodation and arranged my 'working Visa' which was sent to me by DHL before my actual departure for HK.

I worked for the Biomedical department and my internship was 10 weeks long. During the 10 weeks I worked under 4 different supervisors from 4 different laboratories.
The working hours were 35h/week in average, usually from 9.30am until 5pm.

The tasks varied significantly depending on the supervisor. Prior to each task, we were given scientific papers to read through in order to get familiar with the topic.
All of the professors that I worked under and all of the other researchers and students are very helpful and spoke good (with Chinese accent) English.

The salary definitely covered all the expenses. It slightly varied upon which department you were working at, but it was always around 8 800 HKD/month.

We lived in the halls for around 2 200HKD/month which is very cheap compare to any other accommodation facility in HK.
Other than that, the lunch in the canteen was around 40 HKD/meal depending on what you had chosen and normally the food expenses would be like 100-180 HKD/day.

If you are economically smart, you can save quite a nice money over the summer. We used it up mainly on travelling together after the internship (Tawian, Singapore, Malaysia, Vietnam) and also on other free time&weekend activities.

The accommodation was provided by the university. We all lived in the "Homantin halls of residence" which was a 19-floors high building with a sky-garden on every 5th floor. There we would hang out, have BBQs or watch the sunrise.

It is located about 20min walk from the campus. Next year, it should be already connected to campus by the MTR train.

The price was 80 HKD/night.
The whole building is under CCTV control, girls' and boys' floors are strictly separated and no visits allowed between 12pm-7am. It is also important to mention that alcohol and cigarettes are banned in the complex.

All the communication with IAESTE was very smooth. Few days before my arrival our buddies sent us (through both facebook&email) a very detailed description of how to get from the airport to the place of my residence.
They picked me up right at the bus stop and walked me the University halls.
Even though this year the IAESTE had only two student-members/volunteers (Lily&Loktin), they both did an awesome job.
The first couple of days, they'd be with us anytime we needed them. They showed us where the best exchange rates are to be found, where to do the shopping (HK streets can be very confusing), what's the best local food and all those basic things.

Besides one official international lunch organised by the office of IAESTE, there were no other events.

All of the trainees stayed in the same halls. It was very very easy to meet others as the rooms were either double or triple.
Our buddies Loktin and Lily would add each of the new-comers into the facebook group-chat, so naturally we would get to know every single one who wanted to hang out in a group.

This summer 2016, there was slightly above 40 trainees from all around the Europe, few Asian guys and couple of Americans.
We knew one another but of course there were numerous groups of people who would stick together firmly. Still, we got to do few trips & activities all of us together.

Even at work, usually you were not the only intern in the department/working place, so you had someone to walk to the campus with or someone to have lunch with.

In the halls, there was a well-equipped gym, one table-tennis table with rackets and balls and a snooker table, all for free.
At the campus you could access an outdoor 50m-long swimming pool but only with a "staff-card" which usually took like 2-3 weeks to issue.

It's very similar to other Asian foods. To highlight the typical HongKongese specialties that I fancied the most: egg tart, hot pot, dim-sum, steamed bun with pork, fresh soya-bean milk and of course fried rice and noodles.

The good thing about HK being full of internationals is that there are many different cuisines to be found. So if you are fed up with all the rice and noodles, you can head to the nearest International shop or to a western restaurant where you easily get some pasta, sauce, chocolate or dairy products. It is not too expensive (besides dairy products which are very pricy) but still, the cheapest option is to stick to local street food.
Also, Japanese sushi or Korean BBQ are very popular because of the authentic quality and yet, it is still easily affordable.

Halls, campus and many public spots in HK are covered with WiFi so it is very easy to stay in touch with your friends and family.
In HK there are no websites blocked, unlike in mainland China, so you can easily access facebook, WhatsApp, Skype etc.

Right after your arrival, you should definitely get the so called "Octopus card".
You can buyit right at the airport. It costs like 150 HKD which is refundable. The card is extremely convenient. After you load money onto it, you use it to pay the public transport with(swipe it in buses, MTR, trams) something like an electronic wallet. You can also use it in shops and for buying snacks in vending machines.
When you used up all the money, you can load some more at each MTR station or in shops.

Keep in mind that HK is very very hot and humid, no need for number of jackets or sweathers. One jacket is totally enough as you use it only in MTRs or plane where the AC is too strong.
If you work in a lab, then long pants and closed shoes are expected but any other time, you'd be wearing the least amount of stuff possible.

Don't forget to bring:
activated charcoal pills (everybody experiences at least light digestive issues)
painkillers (appointment at the doctors' is not the cheapest here)
Strepsil pills (before you get used to the AC you'll most probably have a bit of sore throat)
cream for rash & allergy, mosquitos repellent, after-bite cream
sunscreen (even our Omani and Asian friends got badly sunburnt)& after-sun cream
basic cutlery and a cup (there was nothing provided in the halls)

An ideal ice-breaker is to bring something typical from your country to share with your new friends :) !!!!

Very pleasant, positive and smooth. We are being very lucky to have such an opportunity 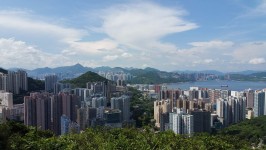 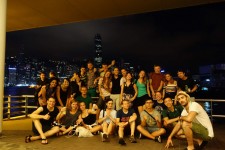 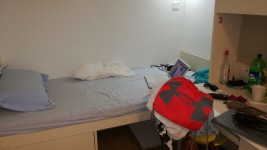 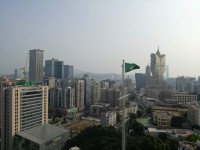 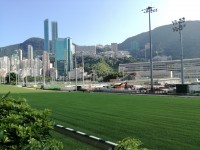 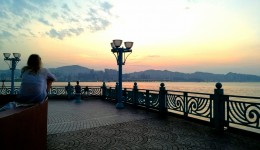 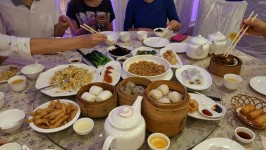 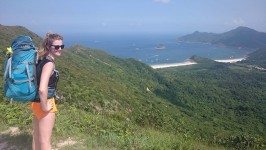 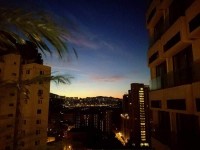 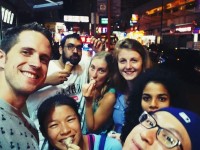 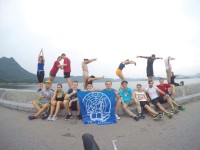