I was in Quito, which is the capital city of Ecuador (South America). It is in the northern part of Ecuador. Quito is in Andes - in altitude about 2,850 metres above sea level. There is also the equator near the city.

Quito is quite big city (2000000 inhabitants, 10 km in width, 40 km in length). The elevation of the city is 2,850 metres above sea level. It is the highest official capital city in the world. Quito is capital city, which is the closest to the equator.

AMORTIGUADORES Y PARTES DEL ECUADOR - it is a company which produce a shock absorbers. This company is part of the columbian company Gabriel. They produced parts for Chevrolet. It´s a very good organized company.

My working period was divided in two parts. In first month I worked mostly in the office. My job in this period was mostly conected with computer. The second month I had opportunity to work also in plant - for example I controled welding process or I helped the local workers.

My salary was 350$. It is the minimal salary in Ecuador. Unfortunately it was not enough for living. Only accomodation costed me cca 220$. The most part of expense I had to pay by myself.

For acceptance was obligatory only English, but for the comunication in the company was necessary Spanish. Only a few people in the company spoke English. First month they gave me some tasks in English but second month I worked in the plant with other workers so I had to comunicate in Spanish. It was difficult for me but with the vocabulary it was possible.

I lived with some more IAESTE trainees in Casa Aqua Canella. I paid about 180-220$ per month - the price depends on the standard of the room. The owner is David Dillon who is a friendly man. IAESTE helped me with founding this place. I liked this place because I was there with other trainees in good company.

I was in contact with IAESTE workers already before ariving quito. The comunication was really good! I met Andres(he is the Johana´s brother, Johana is IAESTE member)at the airport and he took me at the hostel. We organised some events with other IAESTE students every weekend and sometimes IAESTE workers helped us with organisation. We spent with them lots of time and they supported us everytime. If we had a problem, they helped us.

I met many other students easily, because we lived with many IAESTE students in the same hostel. We ogranised together many trips where we met other foreign students. I was also in contact with one Czech student. We met together in Baňos, where we was for weekend.

I went running in the park with my friends from hostel and playing football with my coworkers. I visited the museum of Guayasamin. Quito is a big city with many different opportunities. It depends what do you like.

There are meny specialities and you should try as much as possible. The main raw material is rice - they eat it almost every day. I would recommend to try canelaso which is the traditional drink. You can read on internet that they eat a guineapig - it is truth but it is not so common.

I comunicated only with internet, because you can find it almost everywhere. Callings to Czech Republic are very expensive. The most comfortable way for me was Skype or What´s up. I sent some postcards for my family in Czech Republic also but it was quite expensive.

I recommend to everyone learn at least a bit Spanish before leaving. It is also important to have a good insurance. I was in hospital only for 3 days but it was really expensive. Luckily my ensurance payed everything. Than I recommend to ask in you country which vaccination is suitable.

I have of course lots of working experiences, which I can use for my future carier. Moreover I have many new friends. I improoved my language skills - in English and also in Spanish. I learned about new cultures and discover new places in the world.

Everything was ok. They helped me a lot with many things. When I was in hospital they helped me with comunication and administration. They prepare for me a students card and so on. They are my good friends.

I didn´t have any problem, I have only good experiences. I am happy that there is organisation which helps students to have such a incredible experiences from abdroad.

I recommend IAESTE interships to everyone!!! 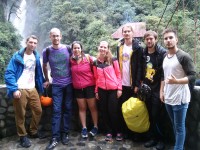 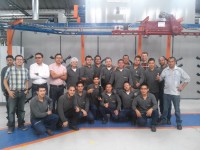