Cyprus is an island in the Mediterranean sea. Its a really hot place, there are only about 10 days per year when it gets `really` cold, like 0 degrees. There are mountains and some amazing beaches so definitely there are places to discover. Also interesting is the mentality of the locals which is quite different from the central european one.

Limassol is a beautiful city in Cyprus and as most of the locals say, its probably the best one for summer. There is both day-beach and night life and its in a good location in order to go to other places in Cyprus.

I was really lucky to meet great people-other trainees, with which we became friends really fast, so we travelled through whole Cyprus together. First week-end we rented cars and went along the coast up to Ayia Napa, which is a famous party place known as the Ibiza of Cyprus. This was cool to see for one night and the beaches are great but its not a place to stay longer in my opinion. Other weekend we went camping to Polis and Trodos in the mountains and took a boat trip to the Blue Lagoon from Latchi port. With IAESTE we visited Paphos, ancient theater and ancient ruins.

I worked in a company SBLA-Sewage Board of Limassol Amathus (SALA in greek) which takes care of assuring the construction of sewage systems and treatment plants. It is a public company which doesn't assure the construction itself but the technical supervision and the work is done through contractors. The building is situated near the old Marina and is neighboring with the Water Board of Limassol.

I think I was the first trainee in the field of civil engineering they have had. Most of my stay, they didn't really know what to expect from a trainee and that I could actually help them. In the end I can say I have done quite a lot of things and learned a lot to. This internship wasn't really in my field of study so I was asking for work all the time because I actually wanted to work and learn. I have had the opportunity to visit the construction sites, control the connections of houses to the sewage system and even get to some labs like concrete testing or water testing in the treatment plant. Next to that I worked on digitalizing files with plot divisions in AutoCAD. At the end I started designing some pumping stations and manhole covers also in AutoCAD. Most certainly I have learned how it can work in a bigger company and how it is to get to work everyday even though the work effectivity can not be compared to the one in central Europe, its just too hot there.

In Cyprus they use checks a lot but it was up to me to decide when I wanted to get one or a bank transfer. So i got one check in the middle of my stay and the rest was transferred to me a few days after I got back home. The salary is not sufficient for normal living there even if you try to save as much as possible. Anyway I travelled quite a lot and overall with the accommodation and everything I ended up -15k but come on, we do it for the experience :).

Ok well they speak greek and everything is written in greek but most of the people speak english and some of them pretty good. A lot of young people go to study to the UK, since Cyprus has been a British colony, and than they come back. The files I worked on where in greek but thanks to numbers and letter I could recognize from math, i managed :)

It was provided by IAESTE for 70e per week. I lived in a student dorm with three floors on the Hero`s square. I had my own room with a shower and WC and I was lucky to be with other 4 trainees on the same floor so we had fun. Other trainees stayed in apartments all over the place but we where all about 10mins from each other.

Since my flight was at night and I arrived early in the morning there was no one to pick me up but I got good instructions how to get to my dorm. From the airport in Larnaca i took a bus to Limassol and from there, there was a taxi waiting for me which got me to my dorm. Other than that we met some IAESTE members during the international evening but other than that not a lot of them went out with us because they either had to work or where themselves on internships.

We had a good group of trainees though so we became friends easily and had fun. I worked with one guy from Austria and another guy from Belgium worked next door in the Water Board. This was good because we went together to work every day. Also we travelled through the whole island together, we were about 10 each time and all for similar periods of our stays. We rented cars twice to go to Agia Napa and the mountains.

There is a great cycling path near the Marina and I planned to go running there but during my stay it was basically one big heat wave so running was really not an option. Anyway we participated on yoga at the beach which was the most amazing and energizing thing so I highly recommend that. For culture there are some nice historical places to visit, and this was usually a part of the two events organized by IAESTE.

You must try local specialities, mese for example is usually a diner dish consisting several courses (up to 15) with all the salads, sauces, meat, potatoes and lots more. Also for bbq a must is souvlaki and grilled Haloumi cheese.

I called home via Skype or mobile since I had a tarif for Europe from my operator but it`s good to buy a local SIM card.

Enjoy it and get ready of the heat.

For me personally, this internship helped me a lot to find out things about myself, how I can deal with new situations and lay off work and enjoy life.

Only when we needed something, but they would help us. 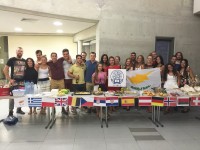 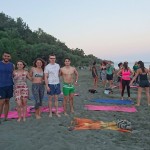 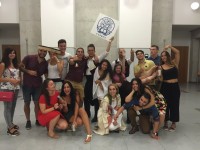 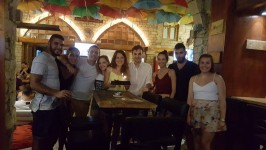 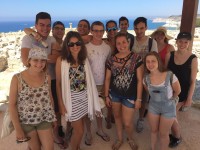