The MIT University was in the city named Manipal. This city is located on the west coast of the India.

The University was in the city named Manipal. It is a small village/city that Indian people called "European city" which probably means, that not many Indians will make a photo with you.

When you want to travel samewhere, you should be prepared for the never ending picture time. Always have same pills agains vomitting, the ways there are horrible for your stomach. And after puking, the Indians want to make even more pictures with you, because you are even whiter.

The employer was MIT University which was from the hostel probably like 20 minutes by walk. You can also take riksaw, which is not expensive and it is really usefull when you have diarrhoea.

My work was at the detepartment of chemical engineering. I worked on the project where I was purifing the wasted water with organic materials. I did not like the job there. I still did not know what to do. My professor was kind, but he told me to be there at 9 a.m. so I was there even before and they came after 12, so I was bored all the time. I even told them that I did not like that I need to wait for them for so long, so next time they came at 10 a.m. they told me that they did not have time for breakfast, so they left before 11 a.m. and then they came back after 4 p.m. So I actually do not know how the Indian "working" can work.

The salary was 5800 rupies per month, which on India is quiet much, but it was not enough for the travelling there.

They wanted from me to have excellent english but that was not necessary. The understanding with the Indian was awfull even for the people from UK. We needed to ask them so many times and we still was not sure, what they were trying to tell us.

The one thing, which was like the best, was the accomodation. The room was only for one person, you had your personal WC, which was usefull during hard times. The living was payed by them, so you did not spend anything for that.

The organisation was really bad, even in the Czech Republic. The one day before leaving the Czech I did not know anything about the pick up, living there, and the not knowing in India was even harder. They did only one trip to Coorg, which was like the worst trip ever, they just wanted our money. It was such a waste of time. We even tell them about that we did not like their trip and they did not even apologised.

The other students where mostly from Europe, but they were also same people from Oman, Libanon and Cameron. From every country there was maximum 3 people, but from Poland there was like 11 people.

In the Manipal there is a gym called Marena. In marena is outside swimming pool. You can buy a permanent card for just gym, or for gym and swimming pool together, it is up to you.

I did not like the breakfast in India and I hated spicy food, but actually I got used to it. The lunch and dinners we were eating together with most of the interns. You should visit Saiba and ask for Butter Chicken with Naan. It was one of the best food I have there.

Buy a glue! I need tu glue my shoes like everyday becouse of the monsoon season. Also they lost my luggage there, so they lost all of my clothes, so I need to buy there all the clothes. Be prepared for anything, even for the sleeping outside even though you buy a hotel room, because not everyone is nice and cool in India. Need to tell that I met there many nice people, but I also met there so selfish ones, that I could not belive that so many of them even exist, maybe they are mostly in India :)

You can buy anything there, but when I came back I have problems with my health. You should take all kinds of medicaments.

The best benefit is that I do not drink Coca cola and Pepsi after my stay in India, because when you puke all the time, it is not nice to puke black stuff. You have it everywhere, which is best when you are on your way and you smell like puking all the 48 hours long way home.

Like I said before it was not the best. The Indian guys did not know like anything (but they try), they spend a lot of time with everything...

Not so great. But I survived. I do not want go back to India, but I want to try another country. 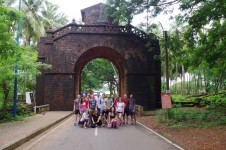 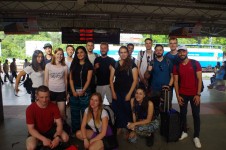 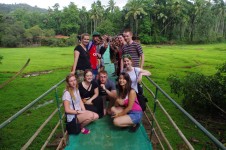