Irbid is the second biggest city in Jordan, located in the north part of Jordan close to Sudan and Israeli borders. It's one hour by car or two hours by bus from the capital city Amman. The Jordan University of Science and Technology (JUST University) is located out of the city (16 km) and you can easily get there by buses which going there and back frequently (when is the bus full) for 0,45 JOD/one ride.

Irbid is not so bid city but you find there everything you need. Public transportation doesn't work at all but you can use UBER/CAREEM which is generally cheap in Jordan. I moved in the city by walking all the time, the farthest places took me 40 minutes.
It's really dirty city, garbage is everywhere ... on the streets, next to the roads/highways. People don't use dustbins much, you can see few on the streets but they're not closed so there are always cats inside and the wind takes plastics bags out.
During the day there is huge traffic, so sometimes is walking the fastest way of transportation but you need to be careful and a bit bold, because there is no crossing and people drive a bit crazy :D

From Irbid you can take bus to nearby cities like Aljoun, Jerash, Um Qais whhere is a lot to see. Also you can go hiking around Irbid which i recommend a lot!! For hiking in Jordan it's good to use an app Wikiloc where you can find a lot of interesting trips.
You can also go for other trips to the center or south parts of Lordan, but it's easier to go from Amman ... worth to visit is Madaba, Mount Nebo, As Salt, Karaq, Al Qasr, Baptism Site on Jordan river, Wadi Mujib, Petra, Wadi Rum, Dead Sea and so many others.

My internship was at the Jordan university of Science and Technology (JUST University) near Irbid. I was working in the laboratory at the Deparment of Chemical Engineering at the Faculty of Egineering. My supervisor was doctor Muhannad Al-Jarrah and i was working on a project with one of his student.

i was working with one of his master student at her master thesis. The theme of her work was Preparation of antibacterial material for food packaging with injection of essential oils to the plastic material. The work was interesting and work in a laboratory wasn't difficult.

Salary was 45 JOD for a week which covered all cost of food. me and my roomated we cooked most of the time, which was cheaper than eating out. But eating out wasn't expensive at all, local restaurants and cafes are not expensive consider to Czech.
For trips and partying you need to be ready to spend your own money.

English is needed if you don't speak Arabic. At the university is the standard of English really high, so communication at the university was without problems. With local people it was a bit difficult but everyone knew at least some basic of English. But in the end you can try to learn some basic of Arabic, which is not easy but if you try to spead with locals in Arabic they are even more friendly.

Accomodation was arranged and payed by local IAESTE. They have found an appartmnet for us in nice and quiet area. Boys and girls lived in separated appartmens but not in the same building, 20 minutes by walking from each other. In the apparment was everything that we needed, we didn't have any problems with neighbors.
I was living in an appartment with two girls, each had its own bedroom, we had a big living room with kitchen, bathroom and balcony.

Comunnication with local IAESTE Irbid was smooth even before comming to Jordan. The Irbid IAESTE contacted me after i was accepted and helped me with everything. The picked me at the Amman airport and drive me by car to Irbid. In the first days they showed me and helped me with everything that i needed to know for living in Irbid. They also helped us in the first days at the university.
We hang out with the members of Irbid IAESTE really often ... to the restaurants for local specialities, to the cafe for shisha or we organized small movie nights.

We meet almost every day with other interns at the university and also out of the univeristy ... we went together to cafe, shopping or we meet at our appartments just to hang out. We also organized our own trips around Irbid for hiking.
In Irbid were only 8 interns so we were a small group close to each other. In trips we have meet with inters staying in Amman (cca 40) and also we hang out with them too :D

In Irbid is a big football stadium where you can go jogging or walking around like locals. You can also rent a playground for football, basketball or voleyball. There is also few gyms and fitness center but they are separated for women and men.
Irbid there is not so many social events like in Amman but there is at least 2 not so big shopping malls, cinema, churches/mosques, ...

The most famous jordan food is mansaf which is meat (chicken or lamb) in sour cream sauce with rice. This food is tasty but also hevay, be ready to have a free day after mansaf!!
Among other local specialities you should try shawarma, hummus and falafel or sweet desert kanafeh!!
You cannot visit Jordan and not to try delicious arabic coffee, which is really diferrent than ours but delicious!!

The members of Irbid IAESTE helped us to arrange a modem for wifi in our apartment and also at the university we could use local computers for internet. Free wifi was in every cafe in the city or in study places where you could study or work whole day.

Jordan is an arabic country so it's different than europian countries ... be ready that in Jordan they have different habbits that you have to obey. Irbid is small city and not so openminded like Amman so you have to wear long trousers/skirts and t-shirts. You don't need to cover you hair like locals but you need to adapt to local habbits.

long clothes - trousers, skirts, t-shirts and for mosque scarf
suncream and hat ... sun is strong there!!
alcohol (hard to find in Irbid, not so hard in Amman) and headphones if you're not a fan of arabic music :D

i have meet with a lot of people from all over the world ... i could get to know new culture and local habbits
i have visited a lot of beautiful places in Jordan, not just the most famous one (Petra, Wadi Rum)
meet and talk with local people ... get to know more about their culture and their religion

i didn't have any problem with Irbid IAESTE ... these people were friendly and helpful the whole time
because Irbid IAESTE is not independent yet, they had to cooperate with Amman IAESTE and sometimes it's was difficult and for the last moment (trips organization) 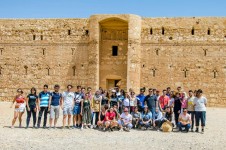 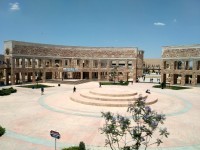 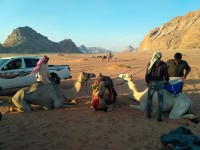